Uses of minerals in everyday life 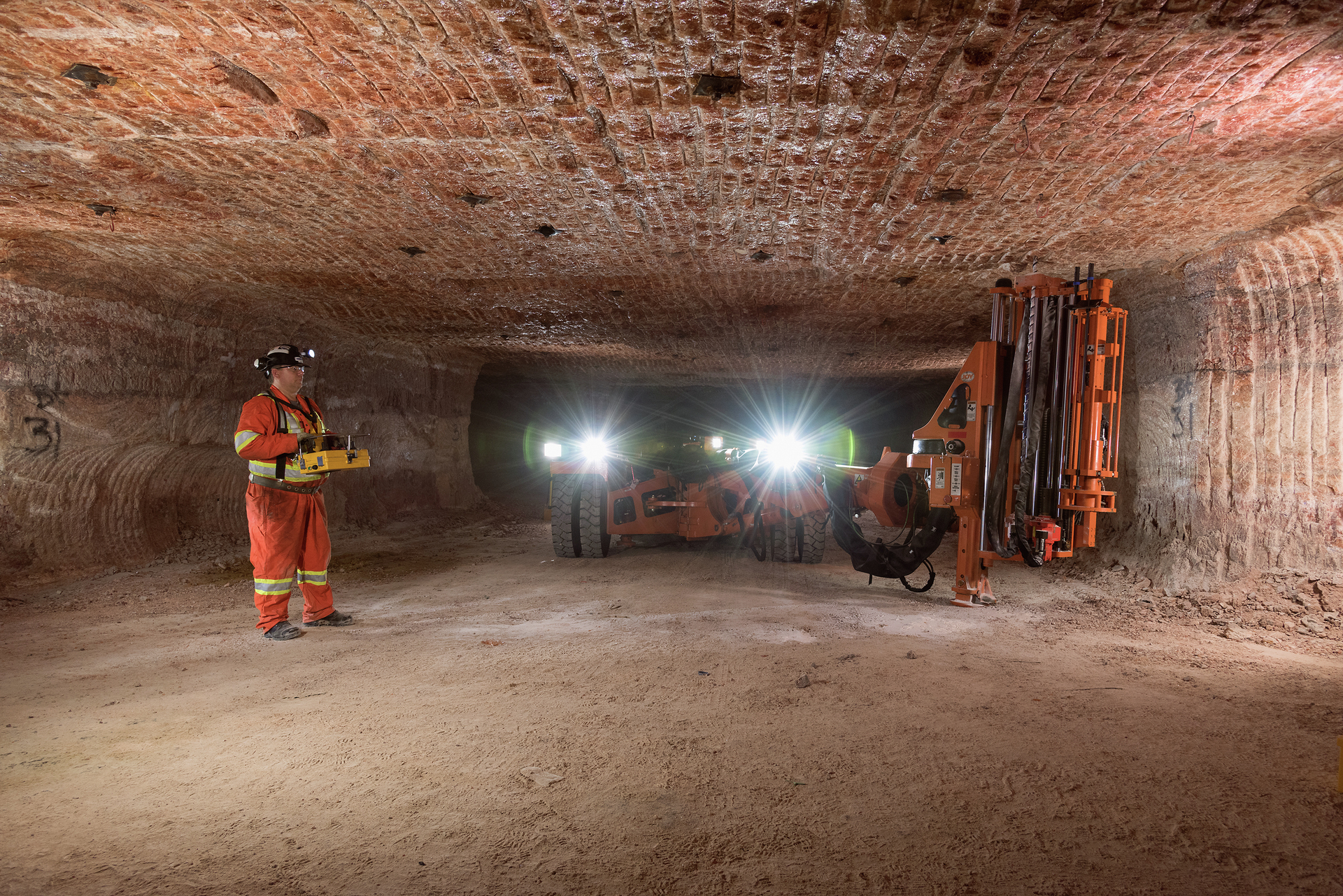 In 2014 a researcher noticed some unusual spots on the rock of a volcanic outcrop in Western Australia. Under a microscope the spots were identified as a brand-new mineral, eventually named putnisite. Headlines celebrated the discovery’s unique chemical properties and translucent, purple crystalized structure. Every detail of its composition was catalogued among a long list of the world’s known minerals.

Minerals have been integral to human advancement since the Bronze Age. Putnisite may have no practical use yet, but you never know which mineral will be key to society’s next burst of innovation ― or to its survival.

There are more than 5,000 different types of minerals, according to Ed Raines, the collections manager for the Geology Museum of the Colorado School of Mines. Not to be confused with dietary supplements, the term minerals refers to metals and industrial resources mostly derived from mining. Discoveries of new ones are fairly commonplace. They’re found in rocks and ancient sea beds and exist in nearly every manmade structure.

Modern society’s reliance centers around a core group of common ones and is joined by a growing list of more obscure minerals associated with the tech industry. “The demand is higher than it ever has been, for almost everything,” says Nevada State Geologist Emeritus Jonathan Price. Population growth could attribute for some of that growth. The United States Geological Survey estimates that the average person will need a lifetime supply of 1,500 pounds of copper, 3,593 pounds of aluminum, and 32,700 pounds of iron.

Yet most people remain unaware of just how ubiquitous the use of mineral resources is in their own lives, down to the simplest pleasures. Even a fireworks display can’t be pulled off without minerals to provide the greens (barium), reds (strontium),  and satisfying “boom” (aluminum powder). Price, who has experience tracking global production of mineral resources, says, “Probably the most common misconception about minerals is that we can do without them.”

Trona is a raw material that is refined into soda ash, which is used to make glass, paper products, laundry detergents, and many other products.

Trona being mined underground using a 12HM26 continuous miner. The ore is then carried to the surface and processed.

To understand the changing world of minerals, look to the ones that power the devices around you. Every component involved in the production, transmission, and use of electricity originates from minerals. “The same goes for [today’s] technology, from all of the things that it takes to make a solar panel, to the things used to make a battery,” says Raines.

Advances in electronics, in particular, are driving the recent explosion in mineral usage. More than 100 billion integrated circuits exist worldwide; a massive accomplishment that wouldn’t have happened without the use of many commonly used minerals. One metal essential to the power grid is copper. According to Thomas Monecke, an assistant professor of geochemistry and mineralogy at the Colorado University of Mines, some 21 million tons of copper are mined annually. The cars we drive, buildings we work in and products we consume all rely on its natural ductile quality and high thermal and electrical conductivity.

Due to their versatility, many minerals have multiple uses. Even metals commonly associated with jewelry ― gold, platinum and silver ― are also used as conductors. Monecke notes that roughly 40% of the world’s gold ends up in electronics and electrical applications.

Four of the highest profile uses of minerals illustrate just how deeply we rely on them.

Electronics: Silica is so common in electronics manufacturing that Silicon Valley, the region that brought us Tesla and Facebook, was named after it. Monitors and keyboards are able to communicate with one another as a result of lightweight semiconductors like silica. In fact, microchips in electronic devices rely on combinations of many mineral elements, from silicon and germanium to compounds such as gallium arsenide.

Cellphones: A single smartphone requires the unique capabilities of more than 30 different chemical elements ― including a tiny amount of gold, the world’s most conductive metal. The glass screen gets its durability from silica sand, potassium and other materials. A thin coating of indium in the screen allows users to swipe right and enlarge maps. Gallium provides the LED backlighting, while tantalum, another critical mineral, is added to improve video and audio quality.

Batteries: “Pretty much everything we have these days that needs a lightweight battery ― lights, cellphones or electric cars ― uses lithium,” says Price. Lithium batteries range from a 10-watt mobile phone battery to a 650-pound electric car battery containing 9 pounds of lithium. Their cathodes contain varying amounts of cobalt, nickel or manganese. Rechargeable batteries will continue to play a significant role in the green energy movement as a means of curbing global warming.

Cars: A decade ago few electric cars were on the road. Now most auto manufacturers are planning to build electric vehicles if they haven’t done so already, says Price. As society weans itself of fossil fuels, more environmental models are using a wider variety and a larger amount of certain minerals. Hybrid cars have lanthanum in the batteries, neodymium in the electric motors, and twice as much copper as non-hybrid cars.

Copper mined in an underground mine is done by sinking shafts to the appropriate levels and driving horizontal tunnels to reach the ore.

New developments in electronics are always on the horizon. More iron, aluminum and other common metals will also be necessary to support future advancements.

A critical era for minerals

Precious gems offer beauty, but a good battery is priceless. Not long after cobalt was recognized as critical in the EU, thieves infiltrated a warehouse in Rotterdam and made off with 112 tons of cobalt, worth more than $9 million.  Thefts of mineral resources are becoming commonplace as demands drive up their value. Cobalt has been around for centuries, but it wasn’t considered indispensable until it was added to the cathode in a rechargeable battery to store solar energy.  It gained further value as a means of preventing lithium-ion batteries from overheating, as well as for its role in medical diagnostic equipment. Its value surged more than 300 percent between 2016 and 2018.

Cobalt is just one of dozens of similarly critical elements. Indium, a soft metal generated during zinc ore processing, is considered critical to the U.S. economy because LCD production relies on it. Necessities most associated with modern society operate thanks to dozens of relatively obscure minerals. They’re needed to create things like 3D scanners and medical imaging systems ― as well as ones used in the infrastructure that supports them.

Some of these materials are part of a coveted group of rare earth elements (REEs ) located somewhere in the middle of the periodic table. At least 60 types of minerals ― many of them rare earths ― are central to the world’s high-speed circuits. Although not all REEs are scarce, their annual production is relatively low. They have an indispensable role in the high-tech industry because of unique characteristics that make them difficult to substitute.

“We will undoubtedly see new types of batteries,” says Price. “New types of magnets will be invented over time that will change the dynamics of the supply of mineral resources.” As societies transition from fossil fuels to alternative energy sources, the demand for many of these resources is likely to grow.

If you drive through Kern County, California, you might hear the distant hum of dozens of enormous wind towers sprinkled across the landscape. They supply 1,548 megawatts of renewable energy to residents throughout Southern California. Two megawatts is enough to serve the momentary demands of 1,500 households. Turning at the center of the large blades are powerful magnets that cause them to spin and generate electricity when the wind blows.

The magnet in a wind turbine can hold as much as two tons of iron, neodymium and boron, says Price. Similar wind farms are cropping up in remote areas around the globe. In the U.S., the amount of wind energy is expected to more than quadruple by 2050. As the trend progresses, mineral supplies will need to keep up with it.

Concern about climate change ratcheted up the desire for alternative sources of energy. The sudden demand for electric cars means automakers must compete with manufacturers of computers and phones for lithium. The renewable energy movement isn’t likely to go away. “Recycling does not add new metals to our society,” says Monecke. “To make our society go green we have to mine even more normal elements.”

Fortunately, reusing and recycling is becoming the norm in this new, greener age. One of copper’s most valuable traits is its ability to be recycled repeatedly without diminishing performance. People are figuring out how to “retire” their cellphones so that the copper, silver, gold and palladium inside can make their way into new products.

An evolving assortment of minerals will continue to play a central role both in electronics and sustainable industries. Manufacturing photovoltaic panels, just like building modern windmills, also requires large amounts of various types of metal. And both products are still connected to the power grid and all of the needs that go with it. 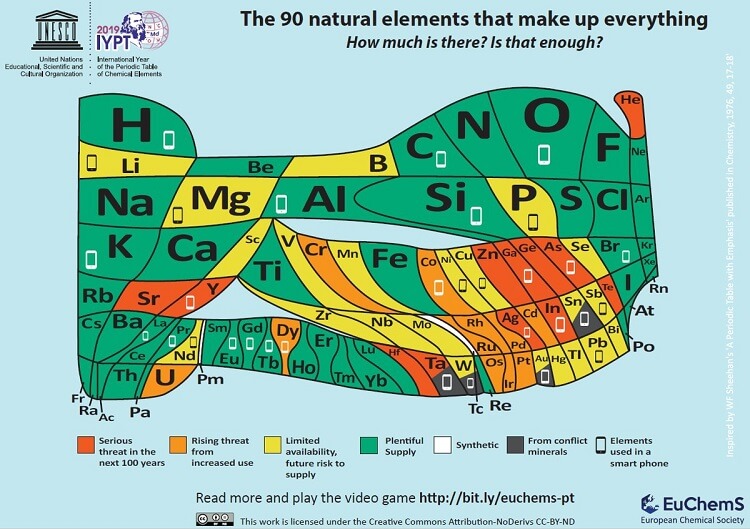 As part of UNESCO’s launch of the International Year of the Periodic Table of Chemical Elements, a new periodic table was created, offering a visual highlight of the scarcity of elements essential in everybody’s daily life.

It’s impossible to predict what form future innovations will take, let alone which minerals will be needed to address them. Some necessities are a given, though. Many of the minerals that have been in use for generations will be at least as crucial as the rare ones currently grabbing the spotlight. “No matter what, we’ll always need the same elements,” Monecke says. More advancements in retrieving and recycling them are sure to come.

The unexpected discovery of a unique mineral can hint at events that took place on earth billions of years ago, so it shouldn’t be a surprise if long-examined mineral resources have the power to address the world’s biggest challenges. “It’s an exciting time for the world of minerals,” says Price. “We’re learning a lot.”