Three Bridges Park in Milwaukee, Wisconsin, U.S. is a 24-acre park that features more than two miles (about three kilometers) of walking and biking paths, 42 community gardens, an outdoor science classroom and access to kayaking, fishing and canoeing on the Menomonee River. Prior to our company partnering with the Urban Ecology Center, the land this park sits on had been vacant and neglected for decades.

Reclaiming this land and turning it into the park it is today was no small feat. The soil had been damaged extensively to the point where it would no longer support wildlife, insects, vegetation or new construction. The surface was also filled with trash and discarded remnants from when the site served as a rail yard.

Building Three Bridges Park was an innovative process. The initial plan incorporated multiple habitat zones to the park’s design to replenish wildlife and plants native to Wisconsin. The next steps involved improving the soil, grading the land for trails, hills and paths and river stabilization to stop erosion.

The transformation of Three Bridges Park

The final phase of this project was the actual construction and renovation. The Urban Ecology Center and its volunteers installed more than 45 acres of native grass, shrubs, trees and other vegetation to this once desolate land. They also built more than two miles of paths by crushing fill from the Marquette Highway Interchange and reusing the concrete to create the pavement. That process alone saved more than 75,000 truckloads of waste from ending up in a landfill.

Only a few years after its opening, Three Bridges Park has seen many insects, animals and wildlife organically return to the area. To ensure the park continues to thrive and be cared for, local businesses have contributed to create a $1.5 million endowment to be used for upkeep and improvements.

Today, Three Bridges Park sees more than 30,000 visitors per year and hosts numerous community events such as candle-lit walks, nature classes and charity events. In addition, the park has been nominated for and won several awards for its appeal as an urban outdoor space and for its sustainable efforts. The awards are listed below:

The transformation of this land is remarkable. What was once a dumping ground, is now full of families hiking along the hilly paths, kayakers venturing down the Menomonee River and bikers racing down the Hank Aaron State Trail. Our company is proud to have played a part in bringing Three Bridges Park to the local community by supporting The Urban Ecology Center. 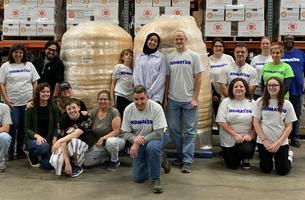