Honoring the Longevity of Komatsu Distributors 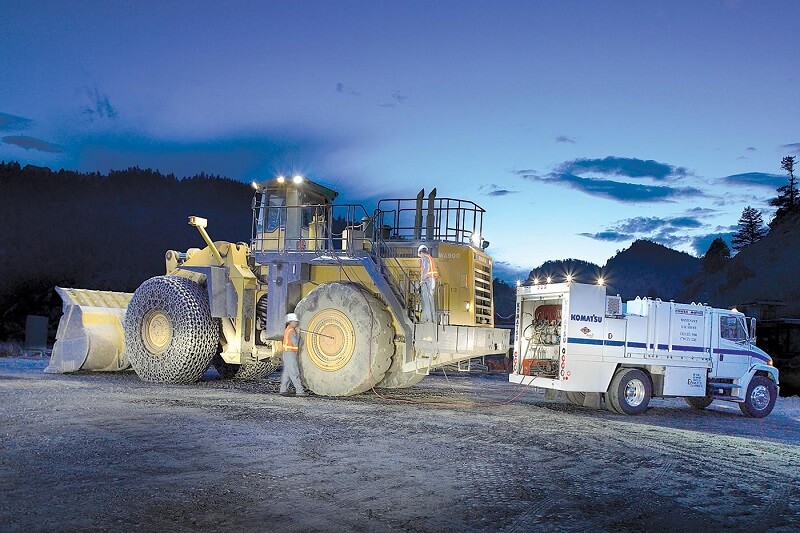 We take pride in the fact that we have decades-long business partnerships with our Komatsu distributors. To celebrate the history and longevity of our company and associates, we’re highlighting distributor partners from across the country. Each, in their own way, helped make Komatsu a success in North America. Collectively, they represent nearly 300 years of service—299 to be exact—to Komatsu and its heritage companies.

When brothers Paul and Fred Berry Jr. moved to Wichita, Kansas, in 1957, they purchased Sam H. Denney Road Machinery Co., an International Harvester distributor. They renamed it Berry Tractor and Equipment Co., reviving the name of the farm equipment business that their father, Fred Sr., operated in St. Louis from 1928-1957.

As Paul and Fred Jr.’s business grew and diversified, they formed Berry Companies, Inc. which has separate divisions, with Berry Tractor named as the company’s heavy construction equipment division. In 1989, Berry Tractor was named the official Komatsu distributor in Kansas as well as in Springfield, Missouri. Six years later, Komatsu named Berry its number one service provider in the nation. 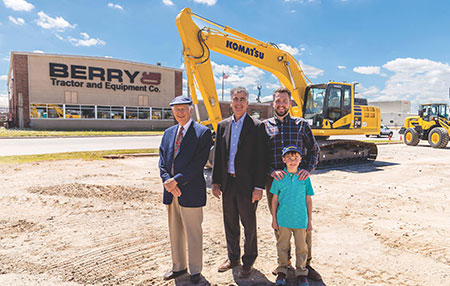 Running the company has been a family affair throughout its 62-year history. In the early 1990s, Fred Jr.’s son, Walter, and son-in-law, Dan Scheer, took over management positions: Dan was named President of Berry Tractor in 1991, and Walter succeeded his father as President of Berry Companies, Inc. in 1993.

The Berrys say customer service and family are the key ingredients to their success. Those elements continue at the forefront of the business today, and current Berry Tractor President Jon Berry, Walter’s son, is the embodiment of both.

Under Jon’s leadership, Berry Tractor has implemented a number of programs to ensure the company meets customers’ expectations and is competitive in today’s market. Berry has overhauled the Product Support Sales Representative position and provides advanced training to all employees to develop stronger customer-service skills.

Jon also led a revision of Berry Tractor’s business model to match the changing equipment needs of its customers. A shift to a well-rounded focus on all construction equipment and a concentrated effort to increase rental offerings have helped the company align with the interests of its customers.

Throughout the years, Berry Companies, Inc. has flourished in the nation’s heartland with seven divisions and 32 branch locations across Kansas, Missouri, Oklahoma, Texas, Colorado and Wyoming—all selling a diverse line of construction equipment and accessories.

In 2017, Berry Tractor celebrated its 60th anniversary, and it continues to operate from the initial building in Wichita that Paul and Fred Jr. first purchased in 1957.

Brandeis Machinery & Supply Company is one of the oldest equipment dealers in the United States. In fact, the company is the oldest founding member of AED (Association of Equipment Distributors) that still operates under the same name.

Founder Robert Brandeis was already involved in a number of other businesses in his hometown in Louisville, Kentucky, when he started Brandeis Machinery & Supply Company in 1908. (And yes, he is related to Louis Brandeis, one of the most influential figures ever to serve as a U.S. Supreme Court justice. Robert and Louis were cousins.)

Brandeis is now owned by the Paradis family and Chairman Jay Paradis, is the third generation of his family to lead the company. The Paradis family involvement with Brandeis Machinery & Supply dates back to the company’s first decade in business. J.A. Paradis Sr. came to Louisville as part of a construction company that was building a large sewer line. He married and settled in Kentucky and was hired by Robert Brandeis in 1917. Upon the death of Robert in 1924, J.A. Paradis, was elected the company’s President. 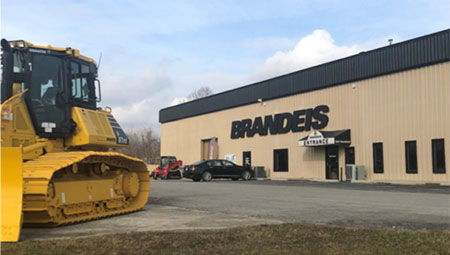 The Brandeis distributorship in Corbin, KY.

Brandeis Machinery & Supply has been in the Paradis family since 1924 and has had only four owners (Robert Brandeis, J.A. Paradis Sr., J.A. Paradis Jr., and Jay Paradis) throughout its history.

Jay guides Brandeis and its parent company, Bramco, with help from Bramco CEO Charles Leis and Brandeis President Gene Snowden, along with many other longtime valued managers and employees.

“First and foremost, we’ve always maintained an intense focus on our customers,” says Paradis. “Through the years, we’ve always done our best to meet our customers’ needs and to take the necessary steps to remain relevant to them.”

The company has undergone numerous expansions since that first, single store in Louisville. In 1946 they opened a branch in Evansville, Indiana, and subsequently opened branches in eastern Kentucky, as well as central and northern Indiana. A merger with Power Equipment Company in Tennessee, brought the combined Bramco organization to 14 branches throughout Kentucky, Indiana, Tennessee, Northern Mississippi and Eastern Arkansas.

“There are always ups and downs in this business and some years are going to be better than others,” Snowden noted. “But, our company’s mix of construction and mining helps balance some of the highs and lows, and generally speaking, we’re optimistic about the near- and long-term future of our industry and our company.”

Can Brandeis last another 100 years as a privately-owned family company? They’re doing everything they can to make that happen.

In 1953, James Cox and Scott Linder, Sr. opened heavy equipment dealership Linder Industrial Machinery Company in Lakeland, Florida. A year later, Cox sold his interest to Linder, who subsequently managed the company for the next 33 years.

Since then, the company has grown throughout Florida and expanded into North and South Carolina. Today, the firm operates 18 Komatsu distributor branches with more than 500 employees in those three states.

“We’re a solutions-based company that works closely with our customers and the challenges they face in the field,” said President and CEO John Coughlin.

A display at Linder Industrial Machinery’s headquarters highlights the 65-year history of the organization. 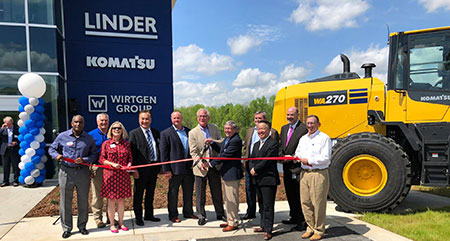 The grand opening of Linder's newest branch in Concord, NC

Linder was named the exclusive Komatsu distributor for construction equipment in the state of Florida (excluding the Panhandle) in 1975. In 1989, the company merged with Dresser dealer H.F. Mason Equipment Company and then acquired Mitchell Distributing Company, which had 10 locations in North and South Carolina. Linder continues its expansion, opening its newest location in Concord, North Carolina, just last month.

“Our employees are the reasons for our past and future success,” noted Coughlin.

Longtime employee B.J. Chastain echoes that sentiment. Chastain started in the parts department with H.F. Mason in 1974 and stayed with Linder after the merger. Now 45 years later, the Product Support Assistant says her favorite part of the job remains the same.

“I love my co-workers, and the company treats everyone so well,” she said. “Linder has a great reputation and is a terrific place to work.”

Linder has repeatedly earned recognition as one of the nation’s leading Komatsu distributors, winning Komatsu’s Chairman’s Award and President’s World Class Award, among other accolades.

One way the organization maintains top-notch staff members is through its commitment to ongoing training, something Coughlin believes is paramount for bringing solutions to customers.

With more than 65 years under its belt, Linder is devoted to providing the same industry-leading customer service on which it has built its reputation. While it will continue to serve as a solutions provider with excellent equipment and employees, Linder will also evolve to meet the needs of the market.

“We will keep delivering a platform from which our company and customers can grow,” said Coughlin. “Jobs are getting more complex, and users are moving into different types of applications with their equipment. That means that we need to work with our manufacturers to develop and carry the best possible products and parts in the industry, while striving to match it with our service.”

In 1970, Donahue sold his interest in Power Motive to Andy Anderson. That same year, Bill Blount came west to attend the Colorado School of Mines. After earning his master’s degree from CSM, Bill joined Power Motive in 1972 and in 1980, when Anderson retired, Blount bought his stock and became owner of Power Motive.

Power Motive, opened its doors on Vasquez Boulevard in Denver in 1959. In 1980, Power Motive moved across the street to its present location.

Power Motive prides itself on the support and rapid service response it provides to customers.

From a previous interview, Bill Blount said, “In 1975, the only products Komatsu sent to the U.S. were bulldozers. In 1984, the manufacturer started bringing over the rest of its line — wheel loaders, excavators, motor graders and trucks.” He went on, “We knew from having the bulldozers that Komatsu was an outstanding manufacturer whose quality was second-to-none. And because the company produced a full line of construction and mining machines, we could not only meet more of the equipment needs of our existing customers, we could also call on many new customers.”

More than 15 years ago while Bill was still CEO of Power Motive, he made a decision to offer managers the opportunity to buy stock in Power Motive. He felt that as an employee-owned company, it would make everyone more accountable and that employees would make better decisions because of it.

Over its 60 years in business, Power Motive has recognized the value of dependable service and the Komatsu distributor remains dedicated to offering its customers the best possible service. The company’s own website sums it up well:

Power Motive Corporation is focused on making sure its customers have all the information necessary to buy the right equipment…[and] no matter how fast the world changes, the one thing that stays the same at PMC is a dedication to providing the best possible support for customers.

The business strategy of exceptional service and personal accountability has definitely paid off for Power Motive. Today, the company has nearly 160 employees and five branches in Colorado, plus one in Cheyenne, Wyoming and is now helmed by the next Blount generation. Mac Blount, Bill’s son serves as the company’s president.