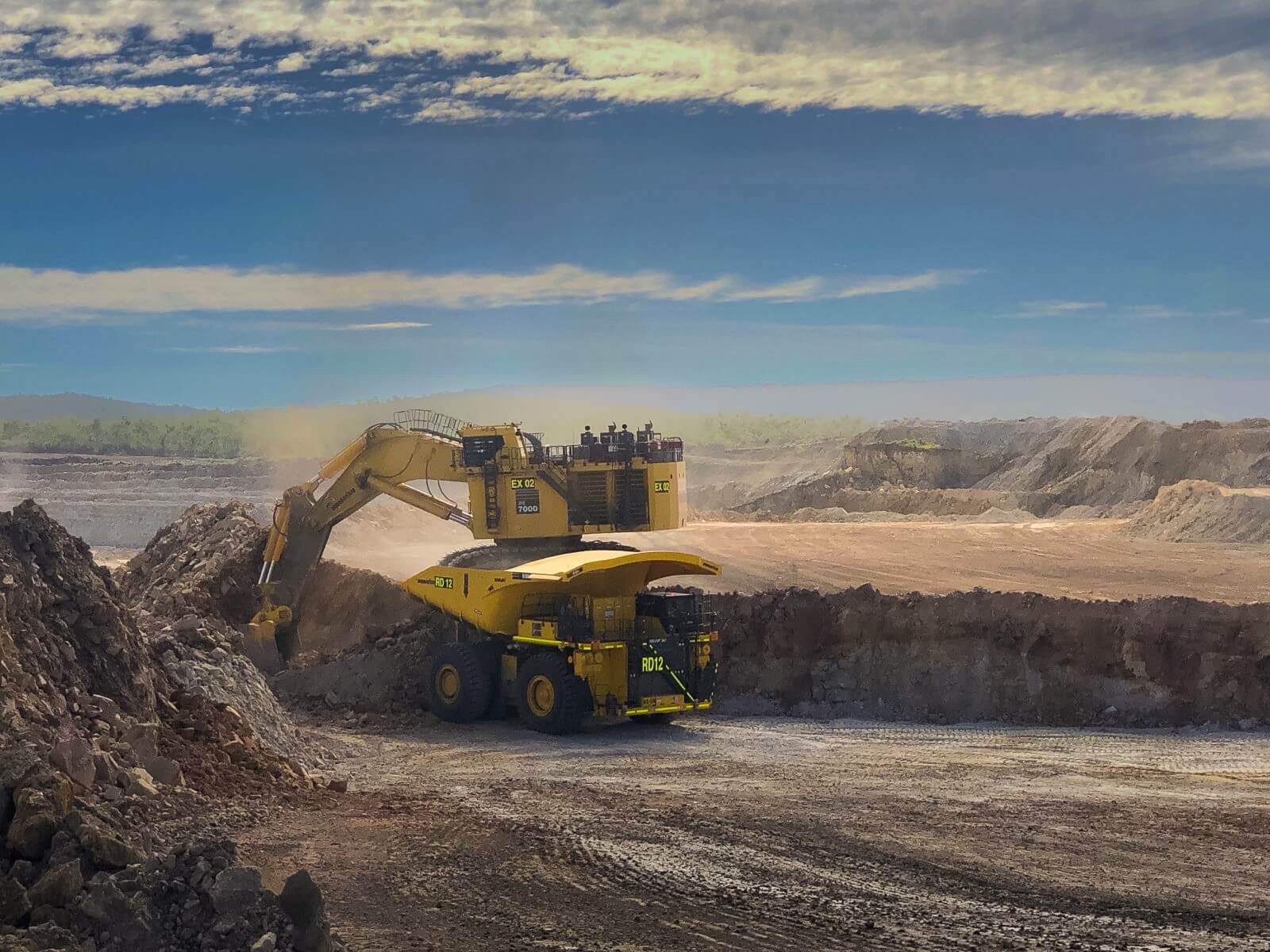 Mining companies around the world are looking for ways to maximize productivity, achieve sustainability and integrate environmental and social goals into their business plans.

But, as Australian-based Batchfire Resources has learned, the seemingly impossible becomes anything but when miners team with manufacturers to create customize-able load & haul solutions that are both autonomous-ready and energy innovators. Paired with a comprehensive machine guidance system (Argus) and ongoing support from a manufacturing partner, these industry innovators have the “resources for a sustainable future” to satisfy ESG goals while also saving time and money.

At least, that’s been the case for Batchfire and their partner, global mining equipment manufacturer Komatsu.

Their close partnership allowed Batchfire to modernize its fleet, adding six new electric-drive trucks (EDTs) (930E-5s) and expanding their machine guidance system, as well as payload productivity and improved payload haulage to OEM truck targets, at the Callide Mine in Queensland. The acquisitions not only propelled the privately-owned Batchfire toward greater efficiency and sustainability; they also positioned the company to surge toward their cornerstone ESG goals, which include developing renewable energy projects, transitioning toward net zero carbon and reducing overall emissions.

The Komatsu 930E-5 provides us with clear advantages in emission control, productivity and safety so investing in this market leading model is the right solution for our business.

“The Komatsu 930E-5 provides us with clear advantages in emission control, productivity and safety so investing in this market leading model is the right solution for our business,” Batchfire Resources CEO Allan Fidock said.

It’s a significant commitment for Batchfire, whose open-cut Callide Mine has grown from 7 Mtpa to around 11 Mtpa since acquisition of the mine in late 2016. The 16,000 hectares of land that Batchfire manages, which has evolved since mining began in 1944, is another dimension of the company’s goal to create Resources for a Sustainable Future.

“Batchfire is a transitional energy business; the transition will not just happen overnight. It will take the dedication of the Batchfire team, its employees and its business partners, like Komatsu, to drive this agenda. It will need to use technology and electric equipment to provide improved efficiencies and reduced emissions which is critical to this journey,” Fidock explained.

And that commitment is consistent with Batchfire’s history of eco-awareness; their energy coal has one of the lowest fugitive emissions factors globally, as well as low levels of inherent impurities, making it one of the cleanest burning low sulfur coals in the Asia Pacific region. That coal enables the Callide Power Stations to deliver low-cost, base-load, network stabilizing electricity to the national grid for residents throughout Queensland.

Their energy supply is not the only way Batchfire supports Queensland, as well as the Biloela and Banana Shire communities; the company is the largest direct and indirect employer in the local Callide Valley, supporting an estimated 1,250 families, whose primary income comes from the mine.

Maintaining those commitments, while also advancing ecologically, is a part of the reason Batchfire partnered with Komatsu to add six EDTs and expand the Argus system to support the new electric-drive equipment and the Komatsu excavators already on-site.

In fact, Komatsu’s ability to balance the shared commercial risk of replacing and upgrading Batchfire’s aging excavators and truck fleet made it possible for Batchfire to even consider onboarding new equipment over the last few years, including three PC7000s and 18 total 930Es.

“We needed a partner who understood our business needs with a tailored and competitive commercial approach,” Fidock said.

“Mutual successes, working together on commercial and equipment risk management made it possible for us to consider adding and leveraging the use of Komatsu technology, Pegasys on two draglines and Argus on seven, now eight, installs on the large to mid-sized excavators,” Fidock added.

Beyond aesthetic appeal, the new EDTs have the power to be a game-changer on the ground at Callide since they arrived in two phases – five trucks in late May and the last truck the first week of June.

The new electric-drive trucks are expected to help the Callide fleet reduce carbon emissions and increase productivity, both by 5% over the next year, according to Batchfire.

The new equipment also injects life into what was an otherwise aging fleet of EH4500s, which can now be decommissioned.

Onboarding all the new fleet took coordination, and Komatsu staff were involved at every step.

The six EDTs were all built in Brisbane, Australia in Komatsu’s Wacol facility, then delivered in stages to the Callide Mine site, explained Russell Lipman, mining account manager with Komatsu Australia who helped oversee the project.

Operator training began weeks before the first trucks even arrived.

“Although the 930E-5 truck has similarities to Batchfire’s existing six 930E-4, there are some differences which operators need to be made aware of in a formal training environment to ensure a safe and smooth commissioning phase,” Lipman said. “Likewise, mechanical, LV & HV training will be carried out concurrently as Batchfire Maintenance personnel will be maintaining these six trucks themselves while Komatsu continues with the existing Komatsu MARC.”

Because Batchfire was able to customize their new EDTs, they opted to have the new 930E-5 trucks fitted with Australian-built DT trays, which are optimized to achieve the highest payload possible in the overburden material they will be hauling to the dumps.

The new trucks were built to be autonomous-ready, so they can be retrofitted to use Komatsu’s Frontrunner autonomous haulage system, if and when the mine is ready to move toward autonomy in the future. Batchfire also expects to save on service time, with the new EDTs taking just 12 hours to go from the service bay and back to the field. And service needs should be minimal; Batchfire and Komatsu expect 930E-5s to have availabilities similar to those achieved by the 930E-4 fleet, averaging around 93%.

“Komatsu electric-drive trucks are known to have the lowest maintenance intensity of any 300 tonnes class truck on the market which drives our customers’ labour costs down and provides lowest cost per tonne productivity,” Lipman said. 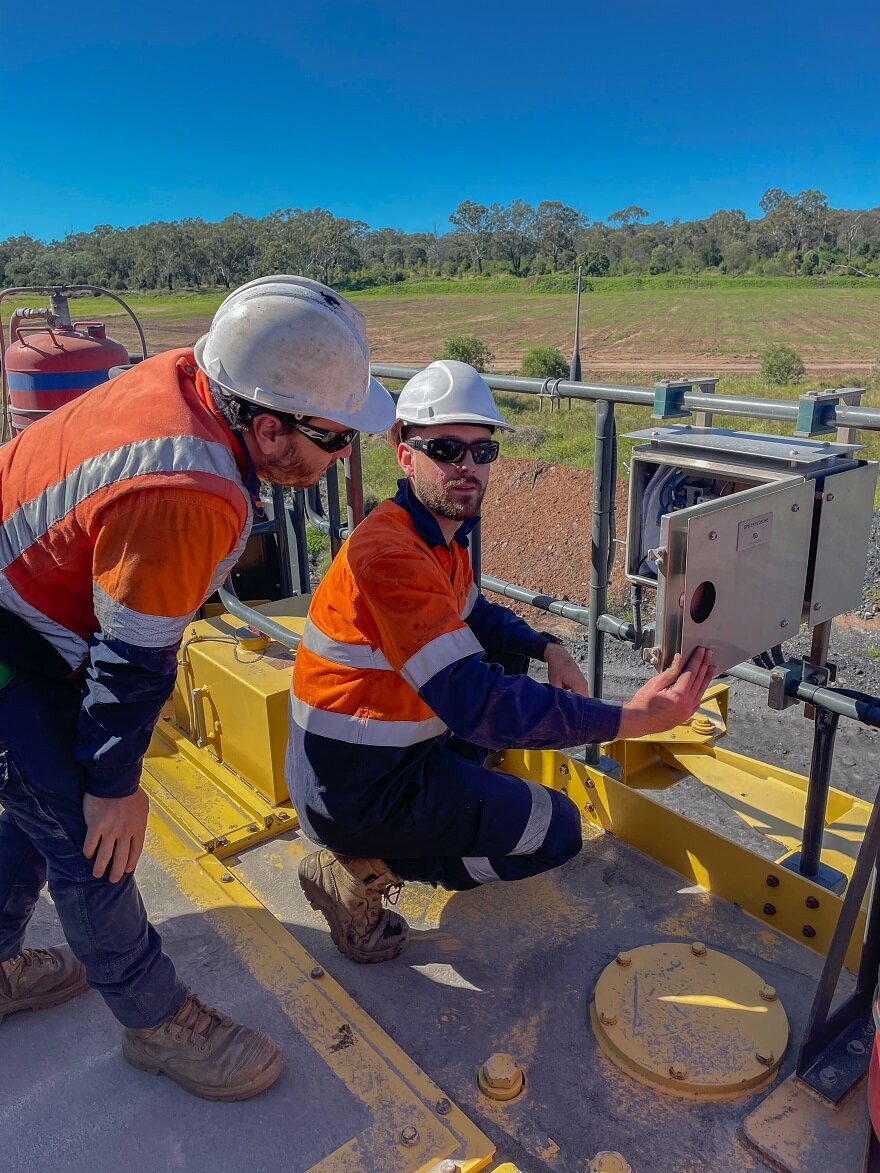 Since 2010, the Callide Mine has used Argus’ sister system, Pegasys, to monitor two draglines on site. Initial installation of Argus on a large excavator happened in 2019, and the system is now used on eight excavators at Callide.

Each Argus rollout led to increased productivity, improved operator efficiency and enhanced safety. Batchfire expects more of the same with this year’s expansion.

Since Argus was also installed on Batchfire’s other fleet of loading tools, making its tools available to machine operators, dispatchers and all other system users for the first time, the company also expects to gather data rich cycling and payload production information and to enable design compliance monitoring in real-time during excavation of particularly challenging geological and geotechnical terrain with tight pit geometry.

Deadlines were tight, but the Argus system rollout coincided with truck on-boarding.

“We installed Argus systems on seven machines in just five weeks, which is pretty impressive,” said Geoff Price, technology systems supervisor with Engineering and Maintenance at Batchfire. “It was a large project, and to have it done in that short a time and completed to a very high standard was a major credit to both our people and the Argus Komatsu technology team.”

To maximize Argus’ potential, Batchfire embraced its Optimised Loading System (OLS), which is included with the new EDTs.

When used as intended with the Argus loading tool software on-board the PC7000-6 hydraulic excavators, mean payloads should increase from about 302 metric tonnes to close to 320 metric tonnes with the risk of increasing overloads.

“Argus provides real time payload information on the excavator, for accurate payload representations on a bucket-by-bucket basis. This gives operators the ability to load trucks to target accurately, prior to any truck scale reweigh. This means each truck leaves the dig face full to target,” explained Tyler Bourne, a key account manager with Komatsu. “Using each truck to its full capacity means you can move the target amount of dirt with fewer trucks, which is less fuel burn and maintenance.”

That means Batchfire can expect to see hundreds of thousands of extra tonnes moved in the same amount of haul cycles – all with ongoing support from Komatsu’s maintenance and technical personnel.

Argus also allows teams to track overloads and underloads at the dig face. In fact, Argus’ Shovel Payload system can help eliminate overloads, which can lead to unplanned downtime for haul trucks, as well as undue stress on the digging equipment. Conversely, reducing underloads allows sites to load each truck accurately, maximizing its potential.

Teams can also upload mine plans, chart real-time data load-by-load, track where machines have been, how long it took to dig a certain area, what material was mined and if it was blasted appropriately cycle by cycle.

Supervisors can watch from a remote desktop to alert dispatch staff and management of any notifiable delays in excavator production and digging to design non-compliance situations. Teams not only can take quick action, but the information is recorded for analysis later.

It’s all good news, especially on the heels of challenging economic times.

“We expect to apply this technology, together with improvements in mine planning, resource, knowledge and people to recover to be in the lowest quartile cost of production per,” Fidock said. Overall productivity is also expected to increase 5% because of the Argus expansion.

The new EDTs replaced aging equipment nearing or beyond its projected lifespan with innovative and fuel-efficient models that will reduce carbon emissions. The expanded Argus program replaced several systems that were more than 10 years old and tethered teams to spreadsheets and manual data entry.

Operational and regulatory needs fueled some of that change. But societal needs also played a role, which is why the combined might of the new EDTs, and the expanded Argus system has also helped Batchfire create valuable inroads toward the company’s environmental, social and governance (ESG) goals.

“We are always looking for fresh and innovative ways to strengthen our ESG practices,” Fidock said.

New equipment and streamlined operations will certainly help Batchfire advance toward its goal of reaching net zero carbon emissions by 2050. But the foundation for that commitment comes from the company’s ESG and Development Team, which is working to identify more opportunities to reduce emissions and develop renewable energy projects, among other objectives.

Batchfire has partnered with the Gaangalu Nation People (GNP), the First Nations representatives from the Callide Valley, to explore options for environmental offsets and to conduct sustainable land management practices such as seasonable cold burns and fencing to protect wildlife.

The company has renewed the Mount Murchison Nature Refuge Agreement in support of our sustained commitment to flora and fauna preservation.

And Batchfire is developing a progressive rehabilitation and closure plan for the Callide Mine to include traditional and innovative sustainable post-mining land uses on rehabilitated areas.

“We believe that our people – both our employees and the community more broadly – are at the heart of what we do,” Fidock said.

Those people need health and safety programs, industry trainee opportunities and the chance for members of the First Nations community to find jobs – all priorities Batchfire has made part of their ESG plan and supports through improved productivity, efficiency and energy savings.

And all goals that are more achievable than ever because of their renewable energy-driven EDTs, a comprehensive machine guidance system and support from their manufacturing partner.