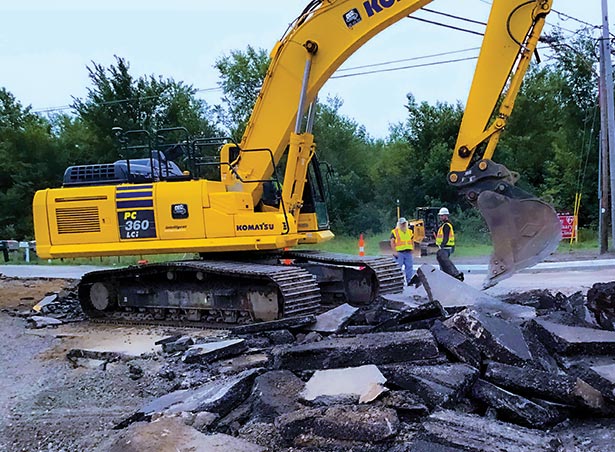 Tri-City Groundbreakers takes on a MDOT project on Highway M-15 near Davison, Michigan with the PC360LCi-11. 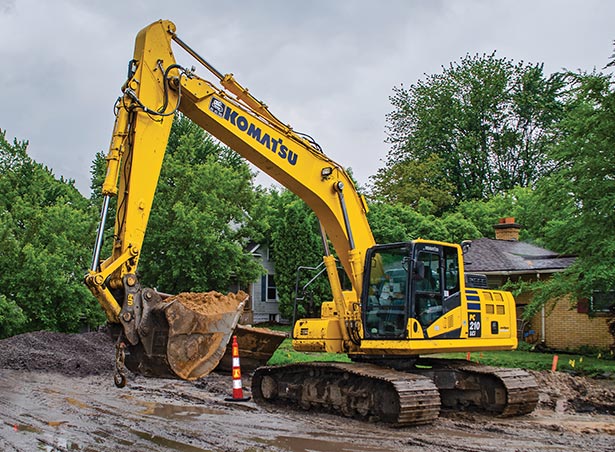 Tri-City Groundbreakers uses iMC excavators to finish jobs on grade, on budget and on time

In 2005, John Schmidt and his wife and co-owner, Tamara, opened Tri-City Groundbreakers Inc. in Midland, Michigan. A self-proclaimed “tech geek,” John’s love for electronics and the latest gadgets fostered a deep knowledge of technology, which he merged with the skills he had honed as an operator working in commercial and residential excavating, road construction and underground infrastructure.

With little history, no name recognition, and a non-existent project list when they started, Tri-City Groundbreakers needed to capitalize on any advantages it could. For John, the key was investing in technology and it’s paid off. Today, the firm has as many as 55 employees during busy times and specializes in road projects with underground infrastructure installation aspects.

“In 2007, we constructed a 35-acre stone parking lot using stakes and ribbons,” noted John. “I’d thought about getting a GPS system. After that job, I ran the numbers and found that if a system could have held my tolerance to a half-inch, it would have paid for itself on that project.

“Later that year, we had a 700-space parking lot at the same facility,” he continued. “I invested in a rover and base station, and then equipped a machine with GPS. It was awesome. We’ve been doing it that way ever since.

“We didn’t use any stakes or have a person checking grade, but the proof was there,” John said. We were finishing jobs on grade, on budget and on time. We used GPS for all types of jobs – from parking lots to small site pads. It provides an advantage on every project.”

The PC210LCi really shines on pipe installation because the joysticks allow us to move between offsets seamlessly, with the click of a button. The operator can dig subgrade, click the button to do stone, then click it again and do sand grade for the pipe — without stopping. It’s a huge timesaver.

Currently, Tri-City Groundbreakers is running two Komatsu intelligent Machine Control (iMC) excavators, one PC210LCi-11 and one PC360LCi-11. “As soon as we purchased the PC210LCi, the results were great,” shared John. “Having the ability to dig on grade is amazing, and we don’t need a person in the hole, which increases efficiency.”

He says the PC210LCi really shines on pipe installation. “The joysticks allow us to move between offsets seamlessly, with the click of a button,” explained John. “The operator can dig subgrade, click the button to do stone, then click it again and do sand grade for the pipe — without stopping. It’s a huge timesaver.”

Tri-City used the PC360LCi to dig footings for a four-story hospital building. “It was a complicated job with many unique footings,” John noted. “We had the plans created with every detail we needed. The operator could quickly cut to grade, change his increment for stone, then swing to the next footing and get to work.”

Production has skyrocketed with the Komatsu iMC excavators. By eliminating stakes, using smaller crews, and saving material with virtually no overdigging, John stated that the excavators have made the company much more efficient.